PRESS STATEMENT BY RAMKARPAL SINGH – The shocking revelations by Azilah Hadri in a Statutory Declaration in support of his application to review his conviction and death sentence in the Federal Court for the murder of Altantuya Shaariibuu must be investigated without any fear or favour.

In the said SD, Azilah claims to have been ordered by former Prime Minister Najib Tun Razak, with the knowledge of Razak Baginda and senior police officer DSP Musa Safri, to kill Altantuya and dispose of her remains.

If such allegations prove to be true, there must be a prosecution against those involved despite Azilah and Sirul Azhar Umar having been convicted by the Federal Court for the said murder as there is no limitation period in criminal cases and one can be prosecuted for an offence despite a long time lapse, provided there is evidence to support such prosecution.

Altantunya’s family has been waiting for justice

The family of Altantuya has, for years, demanded a thorough investigation into the question of who ordered the said murder in 2006, particularly when both Azilah and Sirul had no possible motive in doing so.

The revelations by Azilah in his said SD are indeed shocking and the family of Altantuya will apply to the Federal Court to hold a watching brief in the said Federal Court review application. Amongst others, we will also take the necessary steps to amend the civil suit of the family of Altantuya which is currently ongoing in the Shah Alam High Court to include the allegations contained in the said SD and the findings of the police investigation as a result.

There is no need to await a police report on the matter as the police can act on the said SD itself.

A fresh statement must be taken from Azilah himself now and those he had implicated in his said SD, including Najib and I urge Inspector General of Police Hamid Bador to do so forthwith in light of the seriousness of the said allegations.

The mystery of who ordered the murder of Altantuya is one that must be eventually resolved and today’s development may be an important step in that direction.

The family of Altantuya will not rest until the motive and personalities behind her brutal murder is revealed and those responsible are brought to justice. 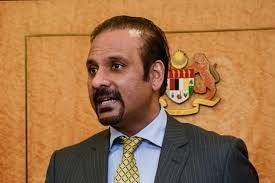