KUALA LUMPUR, Sept 24 – The redelineation of electoral boundaries is a priority for new Election Commission (EC) chairman Azhar Harun. The prominent lawyer, who is better known as Art Harun, has been a long-time critic of the former Barisan Nasional administration.

His appointment came as no surprise to some political observers as he took a break from his regular Facebook posts, and even deactivated his account months prior to the news of his new position being released.

Are we stuck with current redelineation? 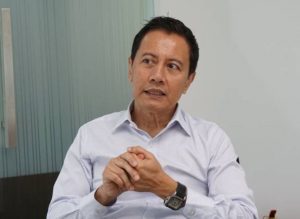 Speaking to The Star, Art said that he first needs to look at the provisions under the law, as well as the Federal Constitution on how he can address the issue of the redelineation being allowed only once every eight years.

“The problem with redelineation is that it is provided in the Constitution that the exercise can only be done once in every eight years. The question is whether we are now stuck with the latest one done earlier this year, for the next eight years?

“So, I will have to look into that on how to address that issue. There are of course other mechanisms that may trigger a new exercise and we have to decide whether they are needed to be done,” he was quoted as saying.

He said that all that he knows about the redelineation is what he had observed and from the reports that came out, especially criticisms by the opposition and other organisations.

“I have not really looked into it in depth but of course it is one of my priorities,” he told The Star.

He admitted that malapportionment, that is the disparity in number of voters in various constituencies, is one of the issues he will address.

Meanwhile, in an interview with The Malaysian Insight, Art said that the redelineation exercise had elements of racial and religious profiling which he hopes to correct.

“Seats are defined by racial profiling of voters. Take the Selayang seat, for instance, where most residents are Chinese. But for certain reasons, the seat was adjusted to include thousands of Malay voters.

“There is also religious belief profiling and it does not reflect the true constituency profile. This has a deeper effect on society.

“After a number of years, it affects the psyche of Malaysians to stereotype a seat according to race or religion, that is, Malay conservative or Malay liberal area.

“The effect is not limited to the voting pattern or results but affects the way we think as a whole. Even government policies could be affected by seat profiling,” he told the news portal.

Automatic voter registration in the cards

Art also said he supported the idea of automatic voter registration for Malaysians.

It was reported last week, that the Cabinet had agreed for the voter age to be reduced from 21 to 18. That would already make for a huge boost in the number of voters in the next general election, and with automatic registration, the number of voters will reach a record high.

Still, Art said the other issues of redelineation, malapportionment and cleaning up the electoral roll is of greater priority at the moment.

Serious on enforcement against election offences

The other aspect of his new role that he wishes to pay close attention to is on the Election Offences Act.

“Policy-wise, the act has not been enforced at all, resulting in offences, like bribing during elections that took place all these years.

“As a lawyer, we have gone to court for election petitions about this issue but the court has imposed a very high burden on the petitioners. They have to prove the offences and how the offences have affected the results,” he was quoted as saying by TMI, adding that he will look into how EC could better enforce the act.

Art also suggested that political parties should no longer fall under the purview of the Registrar of Societies but instead come under the EC, as how it is done in the United Kingdom.

“If they are under EC, the agency can scrutinise the funds that come into the political parties, making the electoral process more transparent.

“Take the case of a certain party leader where a recent raid found a stash of cash in his home. The party claimed that it belongs to them. If parties come under EC, then the agency can look at it,” he told TMI.

Asked about the fate of the commissioners whom many had accused of colluding with the previous government, he said he would like to meet them first.

“I would like to impress on them about my plans and the need for their support. But if they are not supportive, then we can’t work together.

“And if the government wants to replace them, it’s their prerogative. But I plan to discuss this with the commissioners first before deciding. I have to evaluate their preparedness for this new Malaysia,” he was quoted as saying.

KUALA LUMPUR, March 6 – With the date for the next by-election in Rantau set for April 13 – nomination…

Why are former EC and SC chairman given free passes?

KUALA LUMPUR, February 7 – It has been nine months since Pakatan Harapan won the 14th General Election (GE14) and the…