KUALA LUMPUR, April 21 – Three police reports were lodged over the use of a name and logo resembling that of the Malaysian National News Agency (BERNAMA) by a social networking site, which allegedly aimed at confusing the public with its misleading content. A search on the Twitter page this morning shows that the BermanaMY account no longer exist. 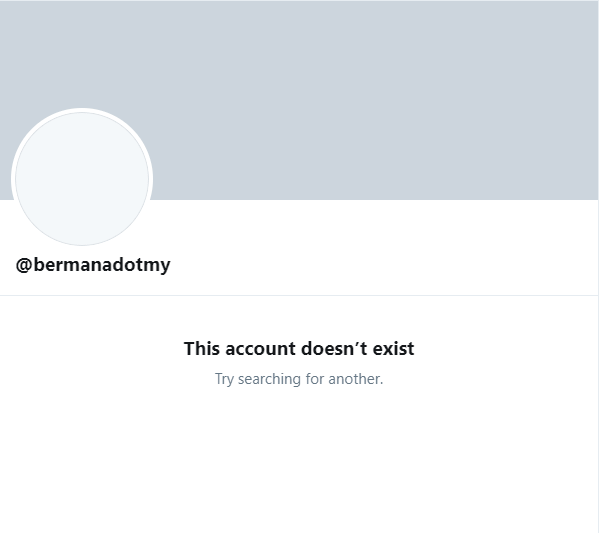 Chairman of Selangor Non-Governmental Organisation (NGO) Coalition, Datuk Nazilah Idris said the reports were lodged as the site was not only using the name of BermanaMY with a logo resembling the official logo of the news agency, but also has been publishing false news by ‘spinning’ ministers’ statements.

“This will cause anxiety and tension among the people that will eventually threaten national security,” she said in a statement after lodging the report at the Shah Alam Police headquarters.

In the report, Nazilah claimed that she stumbled upon a posting with the picture of Datuk Seri Rina Harun, who formerly served as Minister of Rural Development, with a forged statement about the food basket aid for the B40 group being rationed once a month.

“Our search on Google found that the BermanaMY account holder had been spinning news stories aimed at confusing the public over the past few years,” she said.

Last Sunday, the existence of the social networking site using the name of BermanaMY went viral as, at a glance, it resembles the official account of BERNAMA, but offer mostly troll content.

On Twitter, BERNAMA is using the handle @bernamadotcom, while on Facebook, @bernamaofficial, each with the official blue-colour logo of the agency. KUALA LUMPUR, Dec 28 – It looks like Education Minister Dr Maszlee Malik is having his wish of the media…