KUALA LUMPUR, Jan 9 – The speech by Pertubuhan Jaringan Melayu Malaysia’s president (JMM) Datuk Azwanddin Hamzah at a public rally in Klang on December 25 last year had already seen him get arrested over a threat to the police, but he now faces a lawsuit from Primary Industries Minister Teresa Kok.

Kok, who is also DAP vice-chairman, filed the suit in her personal capacity alleging Azwanddin had defamed her during his speech.

In the suit, Kok (right) claimed Azwanddin’s defamatory words, libel and lies about her in the speech had then been carried on online media portals both locally and internationally.

“The speech in their ordinary meaning and natural meaning were understood to mean amongst others that she was a racist, had abused her powers as a minister and acted unfairly, as well was a dishonest minister and unethical and had no principles,” the suit filed by her lawyer Sankara Nair yesterday stated. 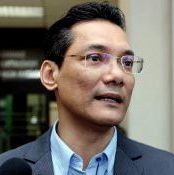 Azwanddin (left) had linked Kok to the riots that took place near Seafield Sri Maha Mariamman in Subang Jaya last November, claiming that she was related to the developers who were alleged to have hired thugs to attack the temple.

He called for the police to investigate such links saying they must arrest her.

“Teresa Kok has to date not dared to make a police report or make a media statement to deny the matter. Today, I demand that police arrest Teresa Kok,” he was reported to have said in his speech, that took place at Dataran Seni Klang, Selangor.

Kok had already promptly denied rumours on social media that she was linked to the developer, when the issue broke in November.

“Please stop dragging me into the fiasco of the Hindu temple in USJ. I am not related to the developer and I have nothing to do with the project,” she was reported to have said.

Kok’s action against Azwanddin comes after he failed to retract his allegation and apologise. She had also demanded he pay her RM30 million in compensation, if he refused to apologise.

The Seafield temple dispute between the temple committee and the developer, One City Development Sdn Bhd, led to two nights of rioting.

One City Development is owned by Bursa Malaysia-listed MCT Bhd, which is in turn majority-owned by the Philippines-based Ayala Corporation.