KUALA LUMPUR, Dec 27 – DAP supremo Lim Kit Siang has reminded Malaysian Muslims and their leaders, that in December 2007, 129 prominent Muslims from all around the world issued Christmas greetings from Amman to the world’s Christians, following up on an October call earlier that year for greater dialogue between the two faiths.

“The Islamic statement thanked the many Christians who have responded to the October call – entitled ‘A Common Word’ – which was issued by many of the same Muslim leaders.

“The ‘Common Word’ initiative continues to be supported by the Aal al-Bayt Institute for Islamic Thought, headed by Prince Ghazi bin Muhammad bin Talal of Jordan.

“The ‘Common Word’ leaders noted the moral principles shared by the Abrahamic faiths, that is Judaism, Christianity and Islam.”

Why are PAS leaders confusing Muslims?

The Iskandar Puteri MP directed this call especially at PAS leaders, whom he suggested were confusing their followers, in a statement.

Lim took aim at the Islamist party and their leaders, asking what do they really want and how do they really feel with the mixed messages that were released during this festive season.

He asked how does PAS expect Muslims to know what is “right” and “wrong” when it comes to the religious festivals of non-Muslim Malaysians when they are not consistent in their statements.

“This greeting came just after a warning by PAS Youth chief Muhammad Khalil Abdul Hadi, the son of the PAS President Abdul Hadi Awang, against posting Christmas greetings on Facebook because the Christian celebration is against the teachings of Islam and that there should not be any acknowledgement of the Christian religion.

“So, is that the official stand of PAS or is it merely the personal view of the son of the party president?

“Who has the bigger say in PAS – the PAS Secretary-General or the PAS Youth chief who is also the son of the PAS President?” Lim asked.

Just to stir the confusion that is PAS even further, its president Hadi was in Dublin, Ireland on Sunday, December 23, talking at a forum organised by Kelab PAS Ireland, and a photo has gone viral showing him speaking at the rostrum with a Christmas tree adorned with decorations and lights next to him in the room, as he addresses the club members and other Malaysians.

“So, what is the stand of Hadi Awang, PAS Mursyidul Am Hashim Jasiin and PAS Dewan Syura on this issue of offering Christmas wishes?” Lim asked in his statement.

Back in the 1990s, news reports showed the late Palestinian leader Yasser Arafat attending the Christmas celebrations at a church in Palestine.

“Are they any less a Muslim as a result?” 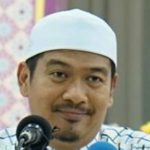 Lim then took aim at the Selangor PAS Ulama deputy chief Ahmad Dusuki Abdul Rani (pic) for his “sad and pathetic” reaction to the tragedy that struck in Indonesia when a tsunami killed a few hundred people.

Dusuki shared a video of an Indonesian pop band shortly before being swept away by the recent tsunami, and in his message blamed the tragedy that befall the people affected by the tsunami as suffering for their vice in playing and attending the concert.